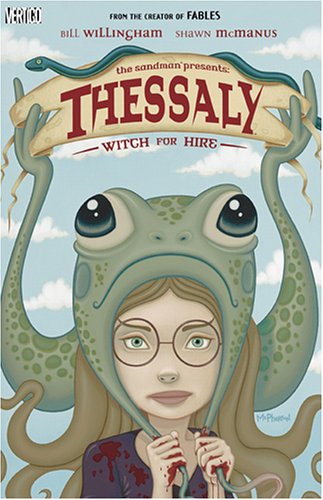 The Sandman Presents: Thessaly—Witch for Hire

Thessaly, a cutie-pie with big glasses and a wicked left hook, first appeared in Neil Gaiman's Sandman comics. Here, she stars in her own adventure, complete with love interest and unbeatable foe. Our heroine is the last of the Thessalian witches. The tale's narrator is named Fetch, a charmingly dapper fellow who looks like a 1940s screen star and is a ghost somehow composed of all the people Thessaly ever killed. Smitten with Thessaly, Fetch has attempted simultaneously to get closer to her and give her life a little meaning by signing her up for a monster-killing contract without her prior knowledge or consent. When our story opens, Thessaly has spent the last two years offing dangerous ghoulies and then finding new places to live when the locals inevitably catch wind of what she's up to; it's made her a bit grouchy, and she's understandably furious with Fetch when he confesses what he's done. With catchy dialogue, McManus's charming and accessible art, a twisted love story and a kick-ass heroine, is a load of fun, and worthy of having "The Sandman presents" written on the book's cover.