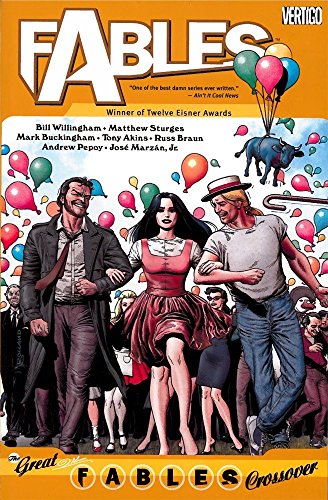 The appeal of has always been the reimagining of fairy tale characters as if they were as messy and screwed up as real people; the characters are divorcées, drunks, womanizers, and overall flawed beings. In this crossover of all the Fables characters from various spinoff books, Kevin Thorn, the creator of the world and its stories, is angry such liberties were taken with his characters and is determined to destroy the Fablesverse and start over. The regular Fables cast, Snow White, Bigby Wolf, and Jack (the one with the beanstalk)—with a few additions such as gun-toting embodiments of the library sciences and Thorn’s son, Mister Revise—try to stop Thorn before he writes them and the rest of the world out of existence. Unfortunately, most of what could be good ideas becomes burdensome, with zigzagging plot twists that bog down the pace. There are a lot of “meanwhiles,” and interesting side points and characters, but the overall plot is lacking.