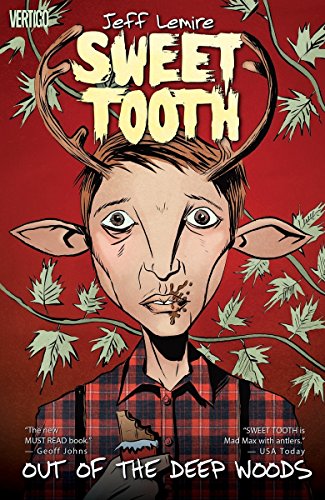 Sweet Tooth: Out of the Woods

The latest entry in the postapocalyptic survivalist fantasy stakes has a peculiar sentimental streak in it. Gus, an almost parodically naïve young boy with antlers sprouting from his forehead and a taste for chocolate, is one of the few children born after some kind of manmade catastrophe. Following the death of his Bible-thumping father, the only other person he's ever known, he's rescued from hunters by a hulking, rifle-toting man called Jepperd, who promises to take him to a sanctuary for kids like him (and slaughters the refugees from Clichéd Dialogue University who get in their way en route). But could Jepperd be more than he seems? (One guess.) Lemire's thick, crunching brush strokes can be rawly expressive; he's got a terrific sense of composition and narrative flow, and the crumbling settings he draws effectively evoke a blasted, forsaken world. Too often, though, his artwork simply comes off as crude. His characters' bodies and features are often distractingly inconsistent from one panel to the next. And Gus's dream vision of a cartoon deer (identified as “Dandy”) telling him to run away, which should be a dramatic peak of this volume, falls flat because Lemire can't pull off his attempted shift away from his baseline style.