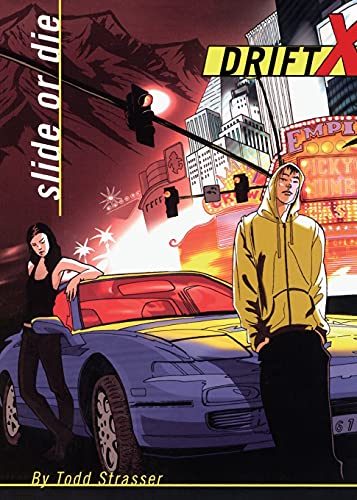 This first installment in a planned trilogy about cars, girls and race by veteran author Strasser ( ) introduces 16-year old Kennin Burnett. He has moved to Las Vegas from California with his older sister to be near their surviving parent—a dirtbag father, who's imprisoned in a Club Fed–type facility for Internet fraud. Kennin makes a friend, Tito, at the casino garage where they work washing the high-rollers' Ferraris, Lamborghinis and Bentleys. Though Kennin is deliberately vague, somewhere in his mysterious California past, he picked up a passion for "drifting," a form of racing which involves skidding around turns while going downhill. Though neither Tito nor Kennin is old enough to drive, Tito's sister, Angelita is. And in her, Kennin finds a mature soulmate, and a girl who knows her way around an RB25DET engine. She also owns a vehicle—a Nissan 240 SX. This becomes important when Kennin is recruited to compete against a racist classmate in a "tsuiso," the Japanese term for a two-car race to the bottom of the hill. The book ends, abruptly, without the race taking place, but the hip subject matter, manga-style illustrations, short chapters and quick pace are sure to attract an audience who will demand the next installment, , due in April. Ages 14-up.