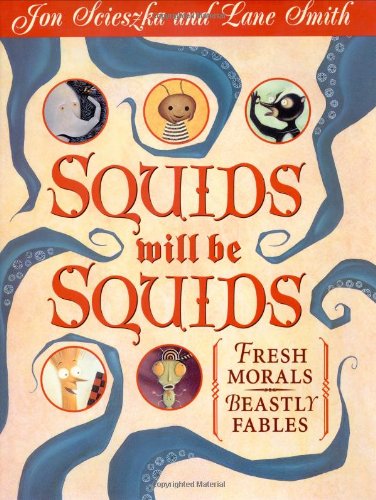 Squids Will Be Squids: Fresh Morals for Beastly Fables

Scieszka and Smith, creators of The True Story of the Three Little Pigs and The Stinky Cheese Man and Other Fairly Stupid Tales, turn their attention away from fairy tales to reinvent the fable, thinly disguising sage bits of advice as pithy morals. Foxes and grapes are too pedestrian for these veteran absurdists, who tackle boastfulness in ""Duckbilled Platypus vs. BeefSnakStikR"" and who denounce vanity in the story of a skateboarding frog. Unusual characters notwithstanding, each piece highlights an everyday, modern situation in the manner of Aesop's classics. Topics in these 18 tales hit the bull's-eye, running the gamut from the toxic clique (Shark, Wasp and Bacteria wonder why no one eats lunch at their table; ""Moral: Think about it"") to the dynamics of a group project (Rock, Scissors and Paper all blame one another for their bad grade; ""Moral: Shoot"") to handling friends and family. In ""Termite, Ant, & Echidna,"" for instance, foolish Ant throws aside his best friend when he meets a new playground pal, realizing too late that ""Echidna is another name for Spiny Anteater."" Scieszka ventures deep into child appeal territory, as in a gas-passing anecdote about a skunk, musk ox and cabbage (""Moral: He who smelt it, dealt it""). Smith ardently keeps pace with Scieszka's leaps of fancy, lending credence to a talking piece of toast, a walrus with a phone and a spiny, spiteful blowfish. In one full-bleed painting, little green Grasshopper cowers in the giant shadow of his mother as she grills him about his homework; strokes of eggplant-colored paint extend the sweeping size of her tentacle-like appendages, while splatters of softer shades suggest the sweat from her brow. In another, the titular fable, Smith utilizes a cartoon-like progression of panels to contrast the animated expressions of Deer, Mouse and Rabbit as they enthusiastically attempt to plan an outing with that of the deadpan, naysayer Squid. Meanwhile the design, with text printed in three typefaces of multiple sizes and colors, drives home each moral. The oversize format allows for a variety of page layouts, not to mention an in-your-face attitude that will hold readers' rapt attention. Unlike Paul and Marc Rosenthal's satiric effort in Yo, Aesop! Get a Load of These Fables (Children's Forecasts, Mar. 23), this crafty volume pays tribute to the original fables' economy and moral intent. Scieszka and Smith thriftily present one tale per spread, and beneath this duo's playful eccentricity readers will discover some powerful insights into human nature. Ages 7-9. (Sept.)
close
Details