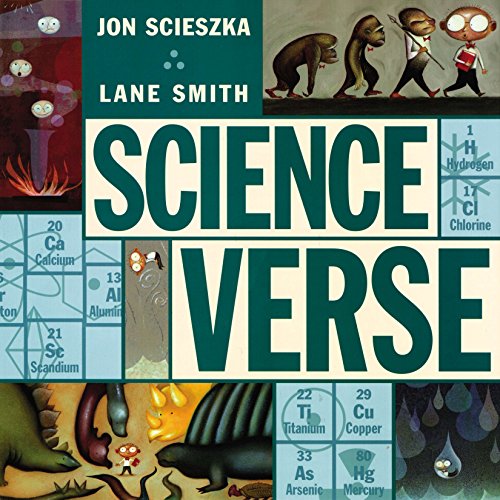 Here the science instructor takes over the role assumed by the math teacher in , as the madcap collaborators deliver another riotous lesson. They cover such topics as the human body, black holes, dinosaurs, atoms, planets and the beginning of the universe, courtesy of Santa's big sneeze ("Merry to all! And to all—Gesundheit!"). A wide-eyed, bespectacled boy laments that Mr. Newton has "zapped [him] with a curse of science verse." Some of the liveliest poems can be sung to popular tunes: "Glory, glory, evolution./ Darwin found us a solution" inspires a hilarious time-lapse art panel beginning with a stooping ape sporting the hero's red bow-tie up to how he appears today. Sprightly spoofs on well-known poems also abound, such as ditties based on nursery rhymes and a nutrition-oriented spin on , "Gobblegooky" ("Oh, can you slay the Gobblegook,/ Polyunsaturated boy?/ 3,000 calories! Don't look!/ The sugars! Fats! Oh soy"); Smith pulls out all the stops with the collage monster he unleashes, a horned, six-fingered beast bearing lecithin, phosphoric acid and the like. As their fans would expect, Scieszka and Lane lean toward the outrageous; alongside a picture of an electrified person-cum-skeleton sticking a fork in a toaster runs this limerick: "There once was a man of science,/ Not one of your mental giants./ He decided to settle/ The question: Does metal/ Fix an electrical appliance?" An accompanying CD of author and artist reading the poems adds another dimension of frivolity. Students attracted to this zany classroom will be thrilled by the book's closing hint of an art lesson next on the agenda. Ages 7-up.