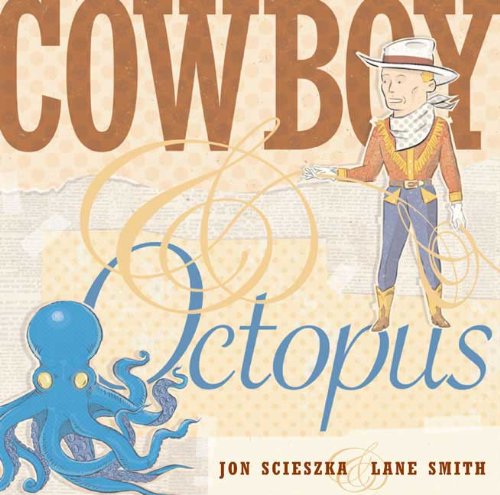 Scieszka and Smith ( ) unpack a bin of old toys and comics for this characteristically oddball entry. Their title page, which depicts a pair of scissors beside a sheet of “Western Heroes” paper dolls and an undersea comic book, reveals the origins of Cowboy and Octopus—both are paper cutouts that pose the same way throughout this episodic volume. Blond, cinematic Cowboy wears pressed jeans tucked into fancy boots and a fringed paisley shirt suitable for the rodeo. Sky-blue Octopus, with a tangle of tentacles, is shaded with pre-digital lavender dots. After cooperating to ride a seesaw, they “shake hands, and shake hands, and shake hands” a total of eight times, cementing their friendship. Octopus wears a doily and tiara for a Halloween costume, proclaiming himself the tooth fairy (“Now that’s scary,” Cowboy quips) and attempts to tell Cowboy a knock-knock joke (“Ain’t nobody there!” the dude protests). At “Chow Time,” Cowboy cooks “Beans and Bacon, Bacon and Beans, and just plain Beans... with a little bit of bacon” for Octopus; the cephalopod, who likes neither, “licks one bean” because “Cowboy has worked so hard just for him.” Greeting-card sentiments about friendship, punctuated by classic cowboy-isms dot the text. Those who love Scieszka and Smith’s absurd humor will get the joke, but this is a lesser entry in the pair’s pantheon. All ages.