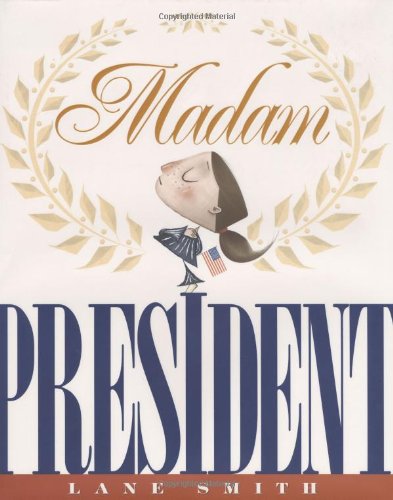 Smith, who slyly recast U.S. history in , introduces a zealous, freckled girl with presidential aspirations. Refreshingly, Katy skips the hand-wringing and never questions whether a girl could become commander-in-chief—instead, she behaves as if she is president already, fulfilling official duties at home and in school. Attired in a dark pantsuit, she brashly inserts herself in a Boy Scout “photo op,” attends a pet frog's “state funeral” and treats an oral report as a press conference: “No comment. I'll get back to you on that.” In mixed-media sequences with emphatic type, Smith mingles earnest words with visual jokes, such as the trail of small American flags Katy leaves in her wake. He depicts the heroine wielding the veto (the cafeteria's tuna casserole gets a nay) and, in florid script, crafts unofficial “Hail to the Chief” lyrics praising “the most awesome one of all” and “her rad administration.” At one point, Katy crows in capital letters, “Why, the president is the most important person in the whole wide world!” (Tiny lowercase letters add, “And the most humble.”) Smith gazes into the national future and just as ably skewers the pitfalls of political office. Ages 4–8.