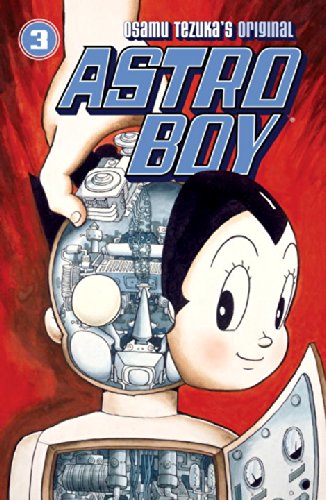 For those unfamiliar with Tezuka, Japan's manga master, the first English translation of the original Astro Boy series will be a revelation, both for its inventive charm and for its surprising sophistication. In "The Greatest Robot on Earth," the novel-length first story of this third volume in the series, the eponymous hero is one of seven robots being targeted by a crazy sultan intent on declaring his own robot, Pluto, the greatest in the world. Pluto dispatches his competitors with ease, but Astro Boy is a robot of a different order. He's the size and shape of a little boy, with spirit and spunk to match, and also has searchlight eyes, jet rockets in his feet and an atomic engine for a heart. This is a pre-digital, 1950s Cold War vision of modernity. Astro Boy must open his chest when he wants to check the time, and the threat of an arms race haunts the story, but Tezuka's generous characterizations give this story a timeless relevance. These robots might disintegrate into piles of screws and bolts, but like humans, they're capable of pride, affection and even a kind of love. Operating out of a steadfast loyalty, they are undone by the greed of the humans who created them. The clean, bold lines of Tezuka's remarkably efficient artwork complement his dynamic storytelling, proving the artist equally adept at capturing nuances in expressions and the explosive action of fight sequences. Entertaining and beautifully executed, this, along with the other pocket-sized editions in the series, is destined to become a classic.