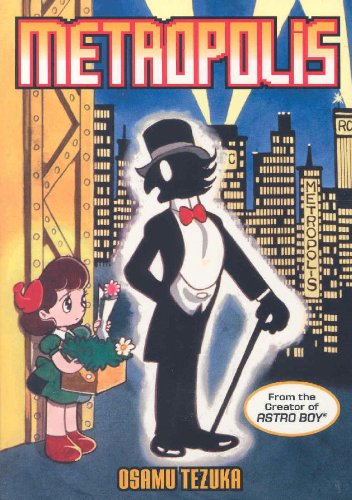 A still from the German film inspired the famed creator of Astro Boy to draw this graphic novel in 1949, and the process was reversed last year, when the graphic novel was made into an animated film. The tale concerns a scientist who's forced to create a genderless being named Michi and then steals it from the criminal who forced its creation. Eventually Michi runs away from its surrogate father and wanders the world searching for its nonexistent parents. Michi's encounters provide a tragicomic commentary on Tezuka's surroundings: the escalating Cold War, human folly and the search for love and affection in an increasingly harsh world. As with Astro Boy and the Disney films Tezuka loved, this work elicits strong emotions through simple allegory. The art, done in Tezuka's early style, beautifully combines classic American cartooning, Art Deco and the Disney stylings of the day. Tezuka's character designs are elaborate and decorative but never distracting, and his panels are crammed with machinery and people, giving his world a bustling vibrancy. He also never lets an opportunity for a joke pass him by. When confronted with a gun, one character says, "I've hated pistols since I was born. Pistols and carrots." Likewise, when the scientist recounts Michi's hardships, Tezuka seizes a chance for melodrama and draws the flashback sequence in an exquisite silhouette style. has a bit of everything and is a wonderful graphic novel for both children and adults. With each American release of Tezuka's work, it becomes clearer why he's regarded as the master of Japanese comics.