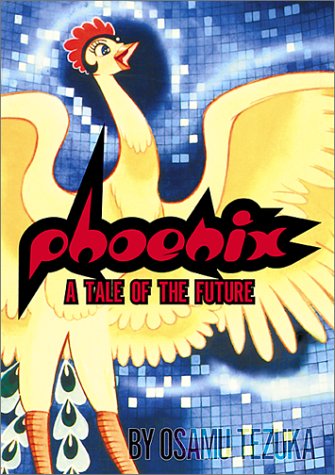 PHOENIX: A Tale of the Future

Chances are readers have never seen anything like this, and not just because it's only now being published in English. Tezuka (1928-1989), known for his manga innovations, considered this series of interlocking stories to be his masterpiece. Viz excellently contextualizes it with essays and an interview with and brief statement by Tezuka. This work, the second of Tezuka's 12 Phoenix books, starts off conventionally enough in the year 3034. Humans have been forced underground by a series of wars, and the remaining population lives in five cities ruled by infallible computers. Young space patrolman Yamanobe is in love with a Moopie (a shape-changing alien) who's taken on the form of a beautiful young woman. When ordered to kill her—Moopies are being exterminated because of their ability to induce hallucinogenic fantasies—Yamanobe flees to the Earth's ravaged surface instead. The cities subsequently blow each other up, and in the ensuing nuclear winter, Yamanobe finds that he's been granted eternal life by the mysterious Phoenix. The story then shifts into high gear: the rest of the book covers not centuries or millennia, but millions of years, as Yamanobe, unable to die and totally alone, watches evolution unfold, from primordial soup to evolved, thinking life forms. Throughout, Tezuka's visual imagination is as stunning as his narrative is ambitious. If readers can get beyond the retro-cute look—the artwork's bold, simple lines might seem overly cartoony given the serious, even metaphysical nature of the story—this is a work guaranteed to blow their minds.