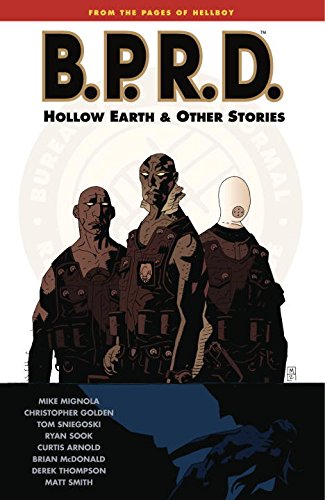 This latest installment in the Hellboy series collects stories about the Bureau for Paranormal Research and Defense, a secret organization that investigates and combats paranormal threats. Hellboy, the hulking demon with the bionic arm, is usually the Bureau's star investigator. But in this book, he has left the Bureau after it tried to kill his friend and fellow agent Roger the Homunculus. Hellboy's absence gives formerly supporting characters a well-deserved chance at the spotlight, especially Abe Sapien, "the popular fishman," who appears in three of the four stories. The first tale, "Hollow Earth," is action-packed but still driven by characters. In it, Abe recruits Roger and Johann, a soul without a body, to rescue former teammate Liz Sherman from a spooky Nazi junkyard at the center of the earth, as Hellboy has show-stealing flashbacks to his first meetings with Abe and Liz that present their former mentor in his most endearing light yet. Another highlight is "The Killer in My Skull," which introduces the kitschy Lobster Johnson, a 1940s-style superhero who uses "the harsher justice of the lobster's claw" to fight crime. Ryan Sook's art on the title story has the dynamism and narrative sense of early Jack Kirby, with a distinctly modern edge. And Derek Thompson's art shines in the last piece, "Drums of the Dead," in which Abe and a psychic must put to rest the ghosts of slaves who died during the Middle Passage. Mignola's witty, appealing characters dash off one-liners as they battle paranormal phenomena while retaining their remarkably human qualities.