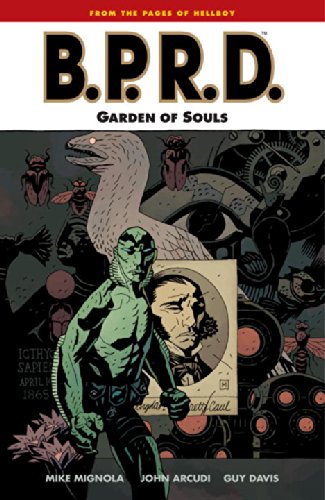 This latest spinoff from Mignola's Hellboy franchise continues the high level of modern Weird Talesâ€“influenced chills and adventure and at times even manages to outstrip its source in chronicling the exploits of the Bureau for Paranormal Research and Defense. More details of amphibious investigator Abe Sapien's murky origins fall into place as he answers a mysterious call to Indonesia, an invitation that brings him into direct confrontation with a cabal of dabblers in the dark arts whose machinations could spell the death of millions. As Abe unravels their sinister plot, he encounters many bizarre characters and situations, including robots, genetically manipulated hybrid creatures and perhaps the most charming mummy ever to grace the horror genre. Meanwhile, the ghostly visitations of B.P.R.D. fire-starter Liz Sherman escalate into hellish premonitions of a world dominated by misshapen monstrosities, and disembodied medium Johann Krauss makes a potentially ominous discovery about another team member. As per usual with this highly diverting series, the pacing is brisk, the artwork is quite appealing and rife with detail that effortlessly blends modern and retro aesthetics