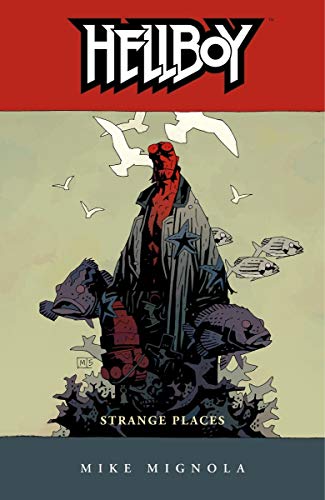 Mignola's first collection in his popular series (since the 2004 film based on it) features two odd, bleak fables. The first and more successful is "The Third Wish," in which the demonic hero has an enchanted nail driven into his skull and encounters an enormous talking fish who grants her own granddaughters' wishes with fatal consequences. In the process, Hellboy learns that he may be fated to bring about the end of the world. The ending is unremittingly dark, with all the surviving characters trapped by prophecies that have the crushing power of myth. Mignola admits in his notes that he struggled with "The Island," which has to do with "the entire secret history of the world," a dragon, some centuries-dead Crusaders and a bunch of Lovecraftian monsters, and ultimately it doesn't make a lot of sense. Fortunately, Mignola's moody, jagged, chiaroscuro-crazed artwork makes everything look lushly sinister and engaging, even when the story threatens to collapse into action scenes. Hellboy himself is a terrific contrast to his grim surroundings: a hard-boiled demon who shrugs off death itself with a "yeah, yeah" and is convinced, against all the evidence, that he's one of the good guys.