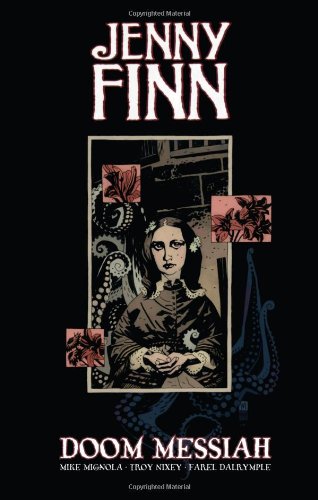 This spooky Victorian thriller by the creator of isn't particularly complex, but has a winsomeness that carries the story. Clients of prostitutes are turning up with gruesome lesions from which emerge tentacles, barnacles and fins. The victims are tended by Jenny Finn, a gentle-but-dour character resembling Emily Dickenson who may be a whore herself. Suddenly, a woman is found dead, and the seaside town turns out to find the murderer. Enter Joseph, besotted with Jenny, who promptly sets the mob on the wrong man. Meanwhile, the prime minister, an odd fellow who wears a diving suit helmet on land, is looking for Jenny; she may be the cause of the lesions plague, or else a strange, oceanic messiah. The black and white art is a mix of baroque and gritty; even oozing sores are drawn with a certain flourish. Oddly, the story ends up being a take on the notion that a pure heart can save the day, except that the pure heart belongs to a man, not a woman. (Jenny, a mystically vengeful rape victim, is far from innocent.) Mignola's fantasy should appeal to lovers of Victoriana, especially nautical-minded goths and steampunks.