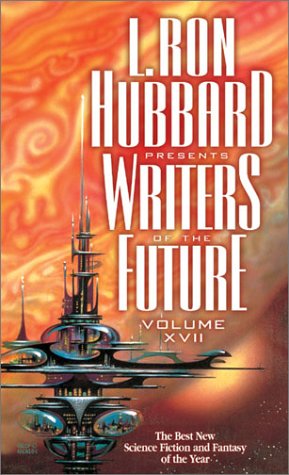 For more than 15 years, Hubbard's anthology series has collected the winning SF and fantasy entries from the annual Writers of the Future contest. Of the 12 stories in the newest crop, few are on par with the works of Isaac Asimov or Robert Heinlein, but fans of the series will appreciate their scope and potential. Two of the most impressive selections, "Magpie" and "Blackbox," portray women who overcome hardships and gain new insights into themselves. The first woman is a witch who was conjured to destroy an old nemesis, and the second is a grieving mother who finds solace in a simulacrum of her dead baby. While unique in their own right, several of the remaining tales were clearly influenced by SF and fantasy classics: "Ten Gallons a Whore," a tale of a man who visits a western Wasteland and trades his precious supply of water to rescue a female slave, is reminiscent of Stephen King's ; and shades of Arthur C. Clarke's are evident in "The Sharp End #1," the seemingly hastily written story of a space mission gone awry. "God Loves the Infantry," meanwhile, a heartwarming tale of a soldier who finds something other than war to live for, bears elements of Hubbard's . Introspective and emotionally engaging at their best but derivative and clumsy at their worst, these stories will satisfy readers searching for new talent.