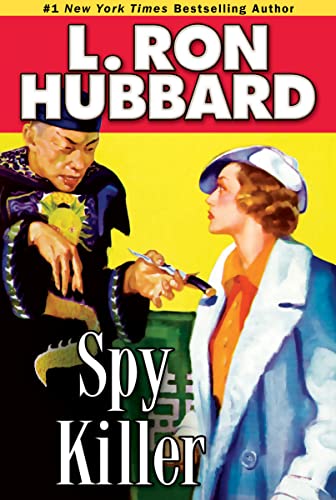 In this fast-paced short novel of espionage and intrigue from pulp master Hubbard, Kurt Reid, bucko mate of the tanker , jumps ship to avoid a murder rap. His goal is the city of Shanghai because “behind it lay all of China” and a fair chance for escape. Instantly, Reid is drawn into a plot involving a beautiful Russian spy, Varinka, and the sinister Gen. Lin Wang and his executioners known as “the Death Squad.” The equally beautiful Anne Carsten complicates the romantic equation. While not as polished or prolific as Max “King of the Pulps” Brand, the future founder of Scientology carved a solid career as a contributor to the popular magazines of his day. This action yarn first saw print in the April 1936 issue of —the bright primary colors of that original cover, reproduced here, add nicely to the timeless pulp appeal.