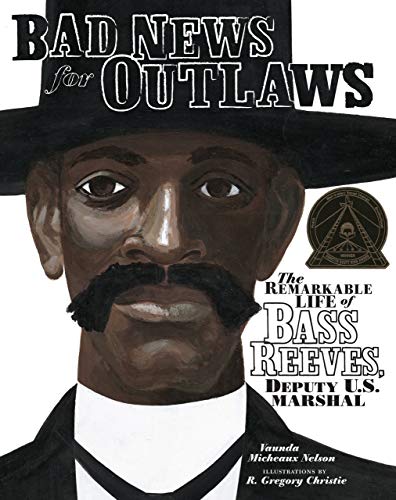 With lively language and anecdotes, Nelson ( ) chronicles the life of African-American lawman Bass Reeves in a biography that elevates him to folk hero. The story opens with an action-packed sequence leading to Reeves killing criminal Jim Webb. The second spread has readers staring down the barrel of Reeves's rifle, in an attention-grabbing, somewhat unsettling closeup. As Webb lay dying, he “gave Bass his revolver out of respect. Bass buried Webb's body and turned in the outlaw's boots and gun belt as proof he'd gotten his man.” Christie's ( ) dynamic full-page oil paintings portray a somber, statuesque Reeves, his big eyes shining from under the brim of his deputy's hat. The folksy language is heavy with simile (“Bass took to guns like a bear to honey”) and jargon (vittles, slack-jawed cowpoke), inviting a drawly reading. It's an arresting portrait of a man who rose from escaped slave in Indian Territory (now Oklahoma) to become a federal marshal who made thousands of arrests, including his own son, but killed only 14 men. A glossary, bibliography, time line and other source material are included. Ages 8–12.