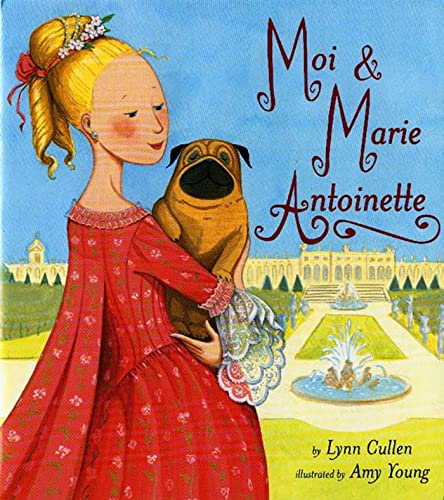 Loosely based on a true story, this picture book chronicles the French queen's journey from an Austrian girlhood to royal motherhood, as narrated by her beloved canine companion. Perhaps in an attempt to better the reputation conferred on Marie Antoinette, Cullen ( ) puts a human face on this historic figure. Sébastien the pug, aka "Moi," peppers the tales of his mistress's adventures with witty asides. Upon learning that Antoinette (as her family calls her) will become queen, he jests, "This news was not as exciting as tender morsels of chicken, but I would have to make do." His self-centeredness is not unlike a child who demands 100% attention from his caretaker. While Moi maintains his presence throughout Antoinette's life, he is mostly left to his own devices, as his mistress becomes too caught up in her responsibilities to pay him much attention. Once Moi ultimately forges a relationship with Antoinette's daughter, he no longer feels like that forgotten child. As in Young's books about Belinda the ballerina, her portraits of the heroine here strike just the right balance between disciplined and playful, so Antoinette always seems approachable, and Moi's loss of playmate the more poignant. The detailed illustrations, especially of Antoinette's and Moi's faces, help convey the many emotions of the parent-child relationship in this rather lengthy read. The result is a softer picture of a queen whom many believe ruled with an iron fist. Ages 5-9.