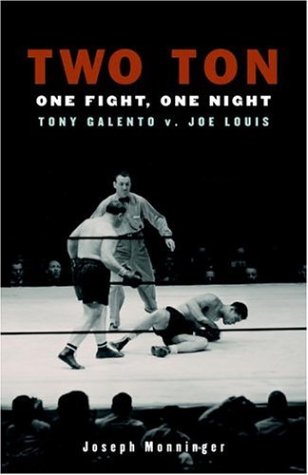 On June 28, 1939, in a heavyweight title fight, a very fat man knocked down the champion Joe Louis in the third round; Louis jumped to his feet and soon dispatched his opponent. From this slender thread, freelance writer Monninger hangs the story of Tony "Two Ton" Galento, a journeyman boxer and spectacular character whose lucky punch made him a celebrity. The child of poor immigrants and a professional "ice man," Galento, in his oversized way, embodied the forces that made boxing a realistic career choice for the poor and the most popular sport in pre-WWII America. As far as underdogs go, Galento is no bout-winning "Cinderella Man" or even a Chuck Wepner (the real-life model for Rocky), but his is an entertaining story. At times, Monninger's digressions range too widely, and he has an unfortunate tendency to impart what he thinks the average guy on the street is thinking. Yet he displays a sure feeling for the eccentricities and color of the era, and he has a novelist's ability to put the reader in the moment. In Monninger's hands, all "two tons" of Tony come alive.