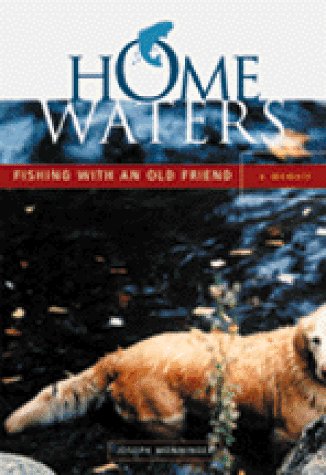 Home Waters: Fishing with an Old Friend: A Memior

Monninger's touching account of fishing and hiking in the company of his beloved Nellie, an 11-year-old golden retriever whom he suspected of having cancer, is both a fly-fisher's engaging daybook and a wonderfully affecting probe of the human--pet bond. Nellie, as it turned out, was cancer-free. But, after the vet removed 17 lumps, Monninger, a prolific New Hampshire novelist (Mather, etc.), refused to have them biopsied, reasoning that he wasn't going to authorize extensive surgery if they proved malignant. Instead, as his way of repaying Nellie for her lifelong fidelity, he decided to take her on one last jaunt to some of their favorite haunts, including Montana's Crow Reservation, where he had spent a summer. Nellie, oblivious to any presumed health problems, contentedly watches bison at Yellowstone National Park, chases a coyote and, in Wyoming, falls head over heels for a male Chesapeake retriever named Chunky. Monninger's own adventures include getting into a leg-wrestling match in a small-town Idaho bar with Kathy, the local leg-wrestling champion. As he parcels out his lessons about unselfish commitment, Monninger keeps in mind that his relationships with people haven't always been as harmonious as his relationship with Nellie. In the end, man and dog return to New Hampshire, moving into a new home, a converted barn built around 1840, along with Monninger's new companion, Wendy, and her eight-year-old son. Monninger's writing sticks so close to the immediacy of experience that his book manages, somewhat amazingly, to avoid sentimentality. Agent, Jennifer Hengen at Sterling-Lord Literistic. (June)
close
Details