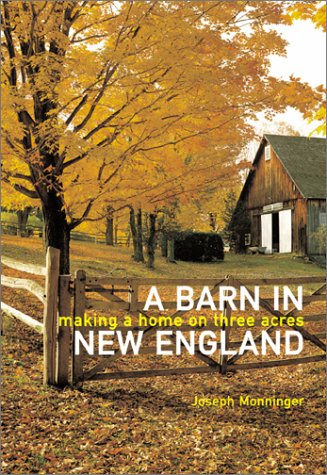 A BARN IN NEW ENGLAND: Making a Home on Three Acres

Gleaming like the sun hitting the 6,000-square-foot barn that gives Monniger's life—and the book—its mooring, this polished memoir follows the seasons, beginning in winter when Manning and his partner, Wendy, first see the New Hampshire barn that becomes their home. As they transform the summer residence into a year-round house, the book combines the fix-it elements of the public television series with a meditation on family, as Wendy and her eight-year-old son, Pie, move in with Monninger and his black Lab. Occasionally, this novelist () and nonfiction () writer's metaphors pile up like too much snow (a breeze is described as "cool brooms of air"). But many are vivid and unusual, as when he relates "the storm made me feel like a cat in a room full of rocking chairs." Sometimes, too, Monninger gets overly elegiac, especially when it comes to barns, whose sacredness he compares to Saint Patrick's Cathedral. Generally, though, Monninger's prose, like his life, is homegrown and deceptively simple. He and Wendy celebrate the news that their offer on the barn has been accepted by roasting marshmallows with Pie, their "traditional Friday-night fare." Monninger collects sleds, builds an igloo with Pie in the backyard and oozes curiosity about his environment, sharing details on everything from the history of the nearby Baker River to a wood pile that needs cobbing. Together, Monninger and Wendy (she's actually the handier of the two) insulate their new home, add coal-burning heaters and, with the help of 70-year-old handyman Clarence, learn to love country living.