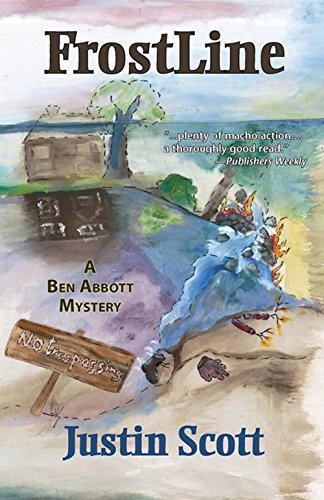 First published in the U.K. in 1997 and now extensively revised and updated, this assured third entry in Scott's Ben Abbott series (after and ) provides plenty of macho action. In quaint Newbury, Conn., real estate broker Abbott gets caught in a nasty land battle between two neighbors: cantankerous Vietnam vet Richard Butler, whose troubled, violent son, Dicky, has just been released from jail, and Harry King, a high-powered former diplomat and owner of Fox Trot estate, who wants Abbott to act as mediator in buying a sliver of Butler's property that juts into Fox Trot. King is creating a lake by damming a stream, but an explosion during a fancy lawn luncheon blows up the dam and turns the lake into a mud pond. In the sloppy remains, Abbott steps on parts of Dicky Butler's body. Since the local sheriff is a dolt, Abbott starts detecting. The book contains many more surprises, all well-turned. Some readers may wish the main character were more fleshed out and the topical references to Saddam Hussein and terrorism were better integrated into the plot, but these are quibbles in a thoroughly good read.