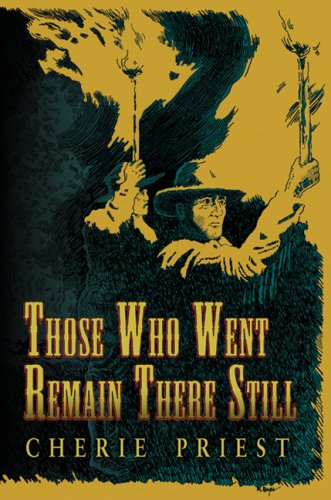 Those Who Went Remain There Still

“Cilled a thing heer—D. Boone” reads a message carved outside a spooky Kentucky cave in this slightly thin campfire tale. The “thing” is a bizarre creature with wings and a sharp beak, and despite Boone's declaration, she survives and spawns. By 1899, the cave is known as the Witch's Pit, and Heaster Wharton Junior—whose father accompanied Boone and fought the monster—hides his will there so his feuding descendants will have to work together to find it. Inevitably, the searchers tangle with the monster's bloodthirsty family. Humor enlivens the action, and Priest ( ) adds cool touches like Boone's ghost and an angry phantom woman, but the monster's origins remain a little too mysterious, giving the story a slightly undeveloped feel. Mark Geyer's illustrations lend old-fashioned atmosphere.