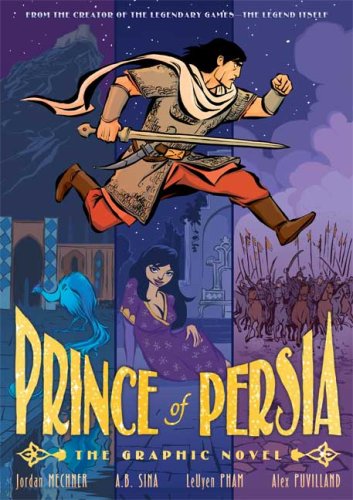 Prince of Persia: The Graphic Novel

Video gamers should enjoy this byproduct of a popular franchise. As game creator Mechner explains in an afterword, the original was widely played in the early 1990s and famed as one of the few video games that had a story line with literary merit. It's been upgraded several times with somewhat different versions of the hero, which Mechner justifies as reflecting the fluid, dreamlike nature of Eastern storytelling. Sina's script for this book lays out two stories simultaneously, echoing and overlapping each other. In the 9th- and again in the 13th-century Persian city of Marv, a rightful prince is denied the throne, a vizier lusts for power, a courageous damsel fights for her lover, etc. The characters can't be sure whether their knowledge of events comes from memory or prophecy, creating a multi-leveled narrative that reflects the game, although readers will need to keep track of which hero is performing on a given page. There's plenty of action, and the artwork by Pham and Puvilland is suitably vigorous and exotic; however, without the thrill of participating in the action on-screen, reader involvement is limited.