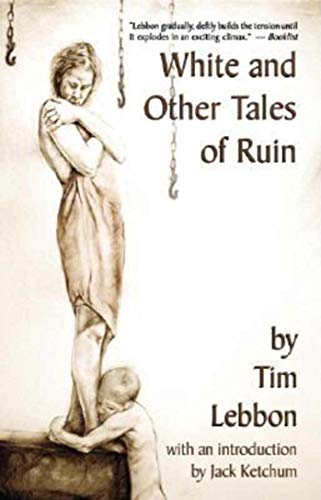 WHITE AND OTHER TALES OF RUIN

Futures blighted by technology run amok, ecological despoliation and evolutionary grotesquerie run through the six novellas that make up this new collection from British horror maestro Lebbon (). Their science fictional backdrops notwithstanding, these Frankensteinian glimpses of dystopias just around the corner are riddled with the visceral imagery of hardcore horror. In "From Bad Flesh," a man's quest to find a shaman who will cure the tumors overrunning his flesh becomes a travelogue through lands of the diseased and maimed, all victims of a virulent global "Sickness." "White" tells of a dwindling band of humans trapped in a terminal blizzard, picked off in hideous fashion by half-glimpsed snow phantoms. In the book's best entry, "The Origin of Truth," a family anxiously awaits the onslaught of an uncontrolled nanotech virus that's voraciously consuming and reshaping the basic matter of the world. Lebbon knows how to render atrocities of the flesh and spirit, but he's on less sure ground when trying to find reassurance for humanity in the midst of the bloody mayhem. One character, observing the surreal contradictions of the landscape, notes, "The deep blue of the sky, decorated with an occasional cloud cheerful in its fluffiness; and the bloody red mess of open meat, steaming insides, pulsing wounds." This contrast is endemic to the grim worldview these apocalyptic fictions share, and readers will be hard put to see the hope amid the carnage.