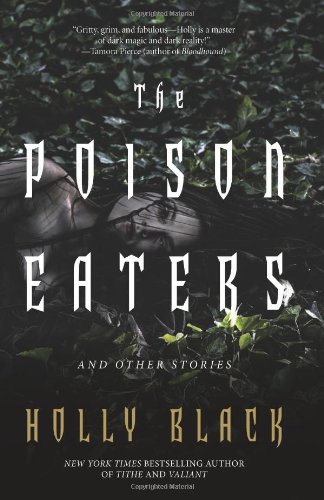 The Poison Eaters and Other Stories

This first short story collection from a favorite writer of dark YA fantasy features 10 previously published tales and two original stories. “The Coldest Girl in Coldtown” tells the story of Matilda, who has been bitten by a vampire and knows that the only way to remain human is to stay “drunk. Stupid drunk. Whatever drunk she could get,” and avoid consuming blood for 88 days. The masterful “The Coat of Stars” concerns Rafael, a gay costume designer who, having lost the boy of his dreams to the faeries, discovers a way to regain him. And the brief but chilling “Going Ironside” concerns an elf girl who has come to our world to get pregnant (“We thought it would be easy.... Find a boy. Roll around in the grass. Dash back. What a prank!”), but has succumbed to heroin addiction. Black (the Good Neighbors series) proves equally adept at urban fantasy and more traditional fairy tales, and her stories often feature the edgy sexuality and angst that have become her trademarks. Ages 14–up.