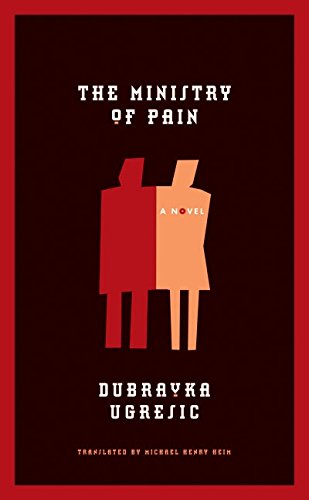 The Ministry of Pain

This cerebral, relentlessly bleak novel bears witness to the "convalescence" of exiles from the former Yugoslavia, Slavic literature professor Tanja Lucic and her students, persevering in Amsterdam in the wake of ethnic cleansing back home. They call themselves "our people" because their native Yugoslavia no longer exists; they refer to "our language" to avoid the "politically incorrect" term, Serbo-Croatian. The way war shreds and disfigures language parallels the way in which refugee living chews up the dignity of Tanja and her students, many of whom work in the punishing clothing sweatshop of the novel's title. Tanja conducts class as group therapy, playing a game of "Yugonostalgia" to come to terms with their horrifying past. The following semester, she is told to shape up her methods, and she turns the class into a serious literary study. Her earlier unorthodox pedagogy backfires, however, triggering a violent climax, after which Tanja truly falls apart. Ugresic (the acclaimed ) writes piercing observations of everyday Amsterdam and of the elder generation in Zagreb. But Tanja's narration, which combines ongoing if eloquent meditation on language and a numb, distanced approach to overwhelming loss, lends the novel an East bloc sterility.