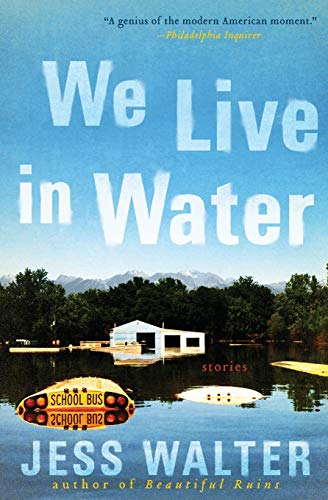 We Live in Water

Title notwithstanding, most of the characters in Walter’s short stories live in Spokane, Wash., but they are often under water, or nearly so. Spokane, as Walter makes clear, bears little relationship to Portland or Seattle, the Pacific Northwest’s name-brand cities. There are no locavores here, and the one potential latte drinker is stuck in Spokane doing his court-mandated community service and prefers scotch, anyway. Walter (Beautiful Ruins) writes—beautifully—about hard luck divorced dads, addicts, con artists, working men trying to keep things together, and a few zombies who’ve made the Seattle of the future look a lot like the Spokane of the present, which Walter describes as a place where, no matter how big your house is, “you’re never more than three blocks from a bad neighborhood.” Both “Anything Helps” and “Don’t Eat Cat” (rule #1 for zombies trying to hold down a job and an apartment) are included in 2012 best-of anthologies, but good as they are, the star is the title story, a heartbreaker set in a formerly seedy, now touristed part of Idaho. Darkly funny, sneakily sad, these stories are very, very good. You know the way Web sites recommend books by saying if you liked this, you’ll like that? The algorithm for this debut collection is straightforward: if you like to read, you’ll like this book. Agent: Warren Frazier, John Hawkins and Associates. (Feb. 12)
close
Details