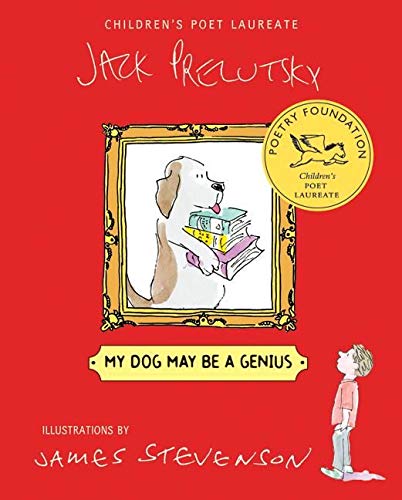 My Dog May Be a Genius

Familiar yet inventive, exuberant and silly, this consistently fresh assortment of light verse and expressive cartoons lives up to the haute goofiness of the best Prelutsky/Stevenson work ( ). This collection of more than a hundred poems includes Prelutsky's distinctive mixture of real and fictitious animals, outlandish pets, wistfully subversive students and anti-establishment characters. There are enough verses about burping and homework to satisfy the usual suspects, but they'll also stick around to find their imaginations jump-started. Wordplay and nonsense include the alliterative items on Sandwich Sam's menu (“beetle beet banana blubber, chigger cheese chinchilla chalk”) and the incomparable pun in the poem “Today It's Pouring Pythons,” in which the ballgame is called “anaconda rain.” Humor and whimsy abound, and Stevenson's clever art extends the comedy, but never overshadows the text. He somehow makes elephants look “extremely graceful,/ light and limber on their feet” in “I'm Dancing with My Elephants,” and he can make eccentricity plausible, as when a father and son engage in their traditional July 4 buttering of their noses in “My Family's Unconventional.” Like the words in the poem “Some Chickens,” the pairings in this volume are “pure poultry in motion.” Ages 5-up.