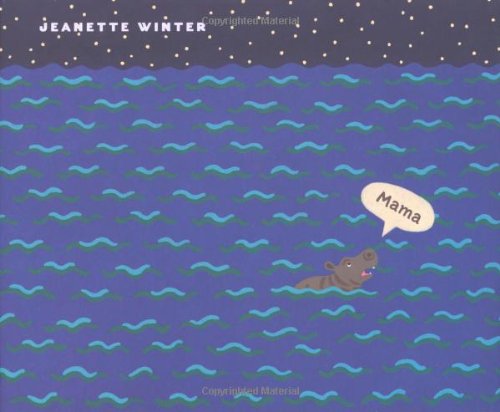 This visually poetic book's subtitle is longer than its entire text: "A true story in which a baby hippo loses his Mama during a tsunami, but finds a new home, and a new Mama." Using only two words, "Mama" and "Baby," Winter ( ) reveals the true plight of a baby hippo rescued after the December 2004 tsunami struck the coast of Kenya (the facts appear in an endnote). A series of acrylic paintings with a thick golden border depict the young hippo calling, "Mama," as he swims alongside his parent in calm waters, nibbles on grass and cuddles next to her under the stars. But soon the frame turns to a violet blue that echoes the color of a tumultuous wave, which soon overtakes the spreads. Parent and child become separated; the mother calls, "Baby?", her offspring cries, "Mama?" each facing away from the other. Subsequent pages reveal the young hippo making it to shore and ultimately to his new home in an animal sanctuary. There he spies a giant tortoise and, apparently recognizes a kindred spirit, exclaims, " " The two bond and a concluding image shows them snuggled up together under a starry sky, as an apparition of a smiling mother hippo looks on. Giving this account a more emotional interpretation than does (reviewed below), Winter reassuringly portrays how friendship can ease a devastating loss. All ages.