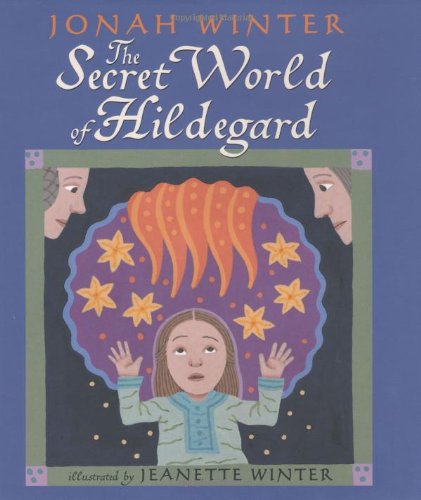 The Secret World of Hildegard

How does one explain to a child a girl's ability to see mystical visions? In this intriguing picture book biography of the 12th-century German scientist, musician and Christian heroine Hildegard von Bingen, the mother-and-son Winters use a blend of crisp, expository acrylic illustrations and a text that blends emotion and historical perspective. Young Hildegard knows her place as a girl growing up in the “Dark Ages.” She doesn't speak of the vivid scenes of flames, stars and angels that appear inside her mind for fear of retribution, even though maintaining her secret causes her various ailments. But when she hears the voice of God and receives a commandment to share her visions with the world, everything changes. Jonah Winter employs a refrain “And there was grayness/and silence and sorrow,/ though a light shone brightly inside her,” reminding readers of the spiritual aspects of Hildegard's faithful, obedient life. His direct writing style makes Hildegard's confusion, suffering and ultimate rejoicing palpable for young readers. Jeanette Winter uses bold graphic imagery, rich, earthy tones and distinct facial expressions in her elegantly composed, neatly framed paintings, conveying a sense of drama and reverence throughout. A concise profile and bibliography further illuminate Hildegard's many outstanding achievements. Ages 4-8.