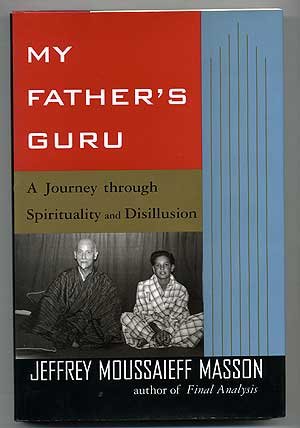 My Father's Guru: A Journey Through Spirituality and Disillusion

In Final Analysis: The Making and Unmaking of a Psychologist , Masson told of his pursuit and abandonment of his career as a psychoanalyst, the time of his life during which he also wrote The Assault on Truth: Freud's Suppression of the Seduction Theory. Here he combines autobiography with the examination of another exalted, and then diminished, figure in his life. In 1945, when the author was four years old, his father, Jacques, whose family was originally from Bukhara in Central Asia, spent four months in India with Paul Brunton (1898-1981), an English writer largely credited with introducing Indian mysticism to the West. In the years following, Brunton--known as P.B.--often lived with the Masson family, which included the author's mother Diana and his sister Linda. Strongly influenced by the ascetic, mysterious Brunton (``He rarely openly stated anything, he preferred to hint''), the young Masson was treated as ``a little guru in the making.'' But years of travel and study (at Harvard College and Oxford University, where he became a Sanskrit scholar) made Masson less willing a believer. He and Brunton broke their relationship when the author was in his mid-20s, though P.B. and Masson's father remained close. This gracefully told tale, laced with deep disappointment and acknowledged revenge, is of greater interest for its glimpse of an unusual family than for its sad unmasking of a hero. (Feb.)
close
Details