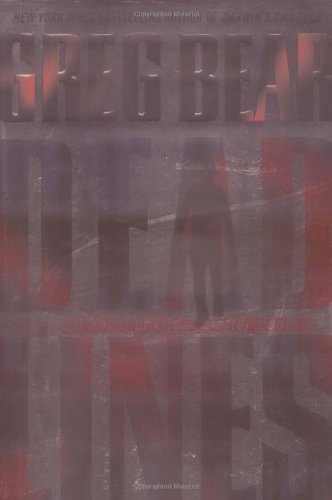 In this taut ghost story set in the California of everyone's dreams—and nightmares—from Hugo and Nebula winner Bear ( ), anything-goes hardcore porn films have blasted softcore screenwriter Peter Russell's career. The horrifying abduction and murder of his young daughter has destroyed Russell's marriage; his best friend has just died; and Joseph Weinstein, the reclusive sugar daddy who employs Russell as a dogsbody, seems to be descending into senility. Worse follows. In pursuit of financial security, Russell sells Weinstein on "Trans," a seductive new gadget promising unlimited instant broad-band communication, and all too soon reaching out and touching via Trans even wakes the dead, whose path to the hereafter is now so clogged with spam and unlimited phone calls that they return to haunt the living. Bear's ability to incorporate scientific concepts into tightly woven, fast-paced story lines reaches menacing new proportions here, because it draws on that nagging suspicion that the ubiquitous, innocent-appearing cell phone may really be killing off its users. By deftly extrapolating that doubt into everyone's most dreaded fears—loss of job, loss of friends, loss of children—Bear reanimates the old story of Faust, who sold his soul for unlimited knowledge and power, hinting ominously that the price of rampant technology may be dearer than we think.