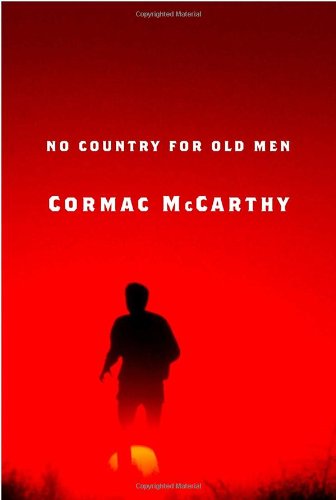 No Country for Old Men

Seven years after brought his acclaimed Border Trilogy to a close, McCarthy returns with a mesmerizing modern-day western. In 1980 southwest Texas, Llewelyn Moss, hunting antelope near the Rio Grande, stumbles across several dead men, a bunch of heroin and $2.4 million in cash. The bulk of the novel is a gripping man-on-the-run sequence relayed in terse, masterful prose as Moss, who's taken the money, tries to evade Wells, an ex–Special Forces agent employed by a powerful cartel, and Chigurh, an icy psychopathic murderer armed with a cattle gun and a dangerous philosophy of justice. Also concerned about Moss's whereabouts is Sheriff Bell, an aging lawman struggling with his sense that there's a new breed of man (embodied in Chigurh) whose destructive power he simply cannot match. In a series of thoughtful first-person passages interspersed throughout, Sheriff Bell laments the changing world, wrestles with an uncomfortable memory from his service in WWII and—a soft ray of light in a book so steeped in bloodshed—rejoices in the great good fortune of his marriage. While the action of the novel thrills, it's the sensitivity and wisdom of Sheriff Bell that makes the book a profound meditation on the battle between good and evil and the roles choice and chance play in the shaping of a life. .