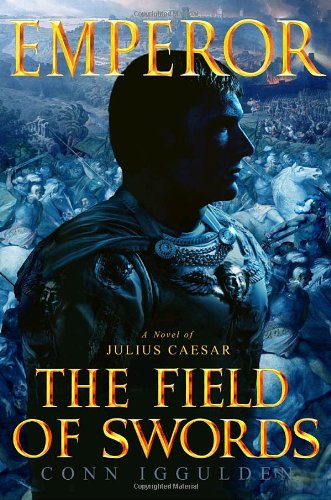 EMPEROR: The Field of Swords

The third (after and ) of four projected volumes in the much-praised fiction series based on the life and times of Julius Caesar, this sweeping epic resumes the narrative in Spain where young Julius is fantasizing about the conquests of Alexander the Great. After four prosperous years with the Tenth Legion in Spain, Julius has discovered gold and decides to return to Rome with his loyal general, Brutus. There, rich with Spanish loot, Julius enters into an alliance with Pompey, a popular and autocratic military leader, and his older, wealthy co-consul, Crassus. Sponsored by this pair of influential and unscrupulous politicians, Julius is elected consul and assumes charge of an expedition to Gaul with full powers to take spoils and rule his conquests in the name of Rome. His eventual victory over Vercingetorix is only postponed by a daring side campaign in Britain. The novel ends as Julius receives word that Pompey plans to have him slain, and Julius, Brutus and Mark Antony prepare to march on Rome, leaving avid readers athirst to read the final volume. Iggulden has been gathering momentum gradually over his first two installments, and here he blasts full steam ahead, with blistering battle scenes ("there was more flesh than grass") and rapier-sharp political intrigue.