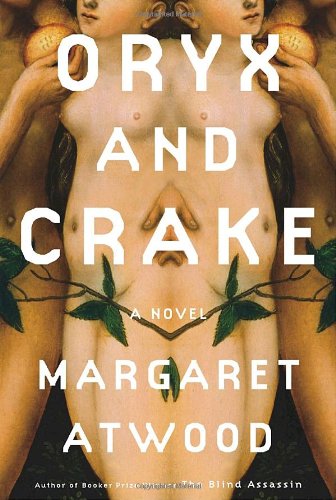 Atwood has visited the future before, in her dystopian novel, The Handmaid's Tale. In her latest, the future is even bleaker. The triple whammy of runaway social inequality, genetic technology and catastrophic climate change, has finally culminated in some apocalyptic event. As Jimmy, apparently the last human being on earth, makes his way back to the RejoovenEsencecompound for supplies, the reader is transported backwards toward that cataclysmic event, its full dimensions gradually revealed. Jimmy grew up in a world split between corporate compounds (gated communities metastasized into city-states) and pleeblands (unsafe, populous and polluted urban centers). His best friend was ""Crake,"" the name originally his handle in an interactive Net game, Extinctathon. Even Jimmy's mother-who ran off and joined an ecology guerrilla group when Jimmy was an adolescent-respected Crake, already a budding genius. The two friends first encountered Oryx on the Net; she was the eight-year-old star of a pedophilic film on a site called HottTotts. Oryx's story is a counterpoint to Jimmy and Crake's affluent adolescence. She was sold by her Southeast Asian parents, taken to the city and eventually made into a sex ""pixie"" in some distant country. Jimmy meets Oryx much later-after college, after Crake gets Jimmy a job with ReJoovenEsence. Crake is designing the Crakers-a new, multicolored placid race of human beings, smelling vaguely of citron. He's procured Oryx to be his personal assistant. She teaches the Crakers how to cope in the world and goes out on secret missions. The mystery on which this riveting, disturbing tale hinges is how Crake and Oryx and civilization vanished, and how Jimmy-who also calls himself ""the Snowman,"" after that other rare, hunted specimen, the Abominable Snowman-survived. Chesterton once wrote of the ""thousand romances that lie secreted in The Origin of Species."" Atwood has extracted one of the most hair-raising of them, and one of the most brilliant. (May 6) Forecast: Readers who know Atwood primarily as the author of The Handmaid's Tale will be thrilled by this return to the future; those who follow her work more closely will be even more impressed. This is a potential dystopian classic and should sell accordingly. Author tour.
close
Details