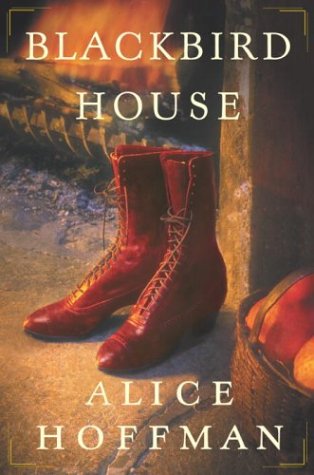 Prolific novelist Hoffman ( ; etc ) offers 12 lush and lilting interconnected stories, all taking place in the same Cape Cod farmhouse over the course of generations. Built during British colonial days by a man who dies tragically on a final fishing trip, Blackbird House is home, in the following generation, to a man who lost his leg to a giant halibut. In the late 19th century, Blackbird inhabitant Violet Cross has a brief affair with a Harvard scholar who inevitably betrays her; in the story that follows, she pushes her son, Lion West, to Harvard in 1908, which in turn launches him to life—and early death—in England. Lion's orphaned son, Lion West Jr., serves in World War II and meets a German-Jewish woman spirited enough to stand up to his possessive grandmother Violet. Hoffman's symbols are lovingly presented and polished: the 10-year-old boy who drowned with his father in the first story sets free a pet blackbird, who returns, now all white, to live with the boy's mother; in the last two stories, a 10-year-old boy blames a white crow for his mischief, and, a generation later, that boy's grown-up sister meets a 10-year-old boy who makes her reconsider selling Blackbird House. Fire, water, milk, pears, halibut—these, too, play important symbolic and sometimes almost magical roles. This may not be the subtlest of literary devices, but Hoffman's lyrical prose weaves an undeniable spell.