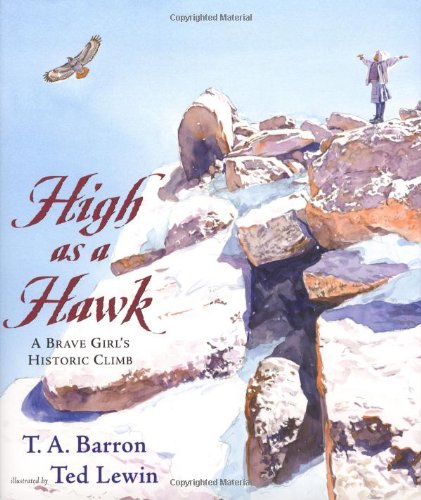 HIGH AS A HAWK: A Brave Girl's Historic Climb

Barron ( ) spins a moment of Colorado history into a dramatic and inspirational picture book about a girl's efforts to scale that state's Longs Peak in 1905. As the book opens, eight-year-old Harriet Peters (whose name is revealed in an author's note) accompanies her father on a climbing trip led by mountain guide Enos Mills. The Peters's goal: to reach the 14,255-foot summit of Longs Peak as a promise to Harriet's mother, who died unexpectedly, and who had dreamed of making the climb herself. As the air thins, Mr. Peters experiences difficulties and must abandon the trek, but Harriet and Mills keep on through brambles, blisters and a blizzard until they joyfully reach the summit—Harriet being the youngest person ever to do so. Barron emphasizes the danger, wonder and excitement of such an endeavor with descriptive phrasing (" 'Tis a rough climb for a wee lass," Mills says) and a suspenseful pace. Lewin's ( ) intricately detailed watercolors celebrate the natural beauty of this rugged landscape via crisp images of trees, shrubs, wildflowers and the powerful face of a great bull elk. A striking, nearly photo-realistic spread depicting an abundance of boulders that seem to shimmer in the sun ranks among many memorable scenes, and a close-up of Harriet reveals her determination. The ending author's note provides further information on Mills, who went on to found Rocky Mountain National Park. Ages 5-up.