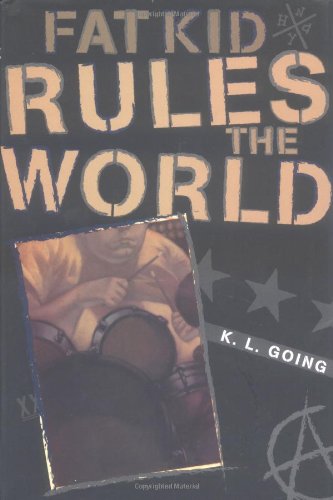 In her savvy and fast-paced debut, Going tells the story of high school senior Troy Billings, 6'1", 300 pounds and completely unhappy. An eternal fish out of water, Troy is on the verge of suicide—at least he believes he is—when he is inexplicably rescued by the dangerously thin Curt MacRae. A homeless boy who constantly pops pills (Tylenol and Imodium, he says), Curt is a legendary local punk rock musician. The unlikeliest of friendships develops, and Curt recruits Troy as the drummer in his new band. Troy, who thinks in headlines (the titular example being one of his more optimistic lines), is a winning narrator, immediately roping us into his sad-sack ennui. But for all his problems—his weight, his relative lack of social skills, a brother and father who don't understand him—there is a sweetness to Troy, which rescues the book from becoming a Prozac nightmare. And Troy's experiences within the band ably mirror his uninvited shove into adulthood. But the most fascinating and compelling character is his father; a widower and a retired marine, he is a man of very few words, but the growth he undergoes in these few pages is remarkable. Going uses a fair amount of explicit language in her dialogue ("No one beats me or fucks me without my permission. Got that?" says Curt) but it lends an air of authenticity to the dealings of two young men—both trapped in their own extremes, both in need of interface with others, both able to clumsily help each other. Ages 14-up.