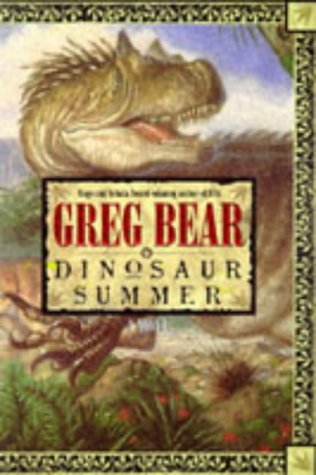 Dispensing with his usual futuristic fare, Bear (Slant) looks backward for some old-fashioned SF with a modernist spin--and mixed results. His premise is strong: in 1947, an American expedition travels to the Venezuelan plateau explored by Conan Doyle's Professor Challenger in order to return to their natural habitat the handful of dinosaurs surviving from among the many taken long ago from the plateau for human amusement. The spin comes not only from Bear's mixing of science fact and fiction but also from his blend of fictional principals with real-life ones. Focal character Peter Belzoni is made up, though his 15-year-old mind and heart seem real enough and give the book a warm YA feel and an effective coming-of-age turn. So is Peter's photographer father, who's shooting the expedition for National Geographic and who invites Peter along. Peter's chief expedition companion, however, legendary Hollywood model-maker Ray Harryhausen, is very real (and still alive), as are other film and circus folk (Merian Cooper, John Ringling, etc.) involved in the trip. The book has a winsome, boy's-adventure spirit to it, and Bear lavishes considerable care on his characters, human and dino. But the pacing lacks vigor. The book's first half, detailing the expedition's progress to the plateau, generates little suspense. After Peter and others are marooned on the plateau, tension builds, but there's no serious payoff until the book's gory climax. In a subgenre dominated by Jurassic Park and that seems aimed at teens (in body or in spirit), that is, even given the novel's many other charms, too little, too late. Illustrations (color and b&w) by Tony DiTerlizzi. (Feb.)
close
Details