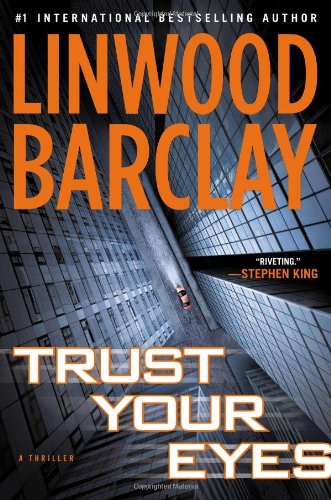 In this tantalizing stand-alone from Canadian author Barclay (The Accident), the death of 62-year-old Adam Kilbride in a tractor accident brings his illustrator son, Ray, home to Promise Falls, N.Y., for the funeral. Ray dreads what lies ahead—primarily figuring out what to do about his schizophrenic younger brother, Thomas. A map-obsessed savant, Thomas spends most of his waking hours on the Whirl360 site memorizing photographed layouts of cities around the world so that he’ll be able to replicate them for the CIA in the event of some future computer-crippling catastrophe. When Thomas witnesses what he thinks is a murder online in the Whirl360 images of a street on Manhattan’s Lower East Side, he insists that Ray investigate. Before they know it, the brothers hit the radar of a ruthless, politically connected ex-cop and his ice pick–wielding henchwoman, who are themselves scrambling to mop up after a high-stakes screwup, and the Kilbrides find themselves in the fight of their lives. The genius of Barclay’s intricately convoluted design becomes increasingly apparent, with throwaway elements later becoming significant and initially discrete story lines eventually linking with diabolic inevitability. While some of the violence escalates cartoonishly, the engaging main characters grab your heart even as the plot makes it stop. Agent: Helen Heller. (Sept.)
close
Details