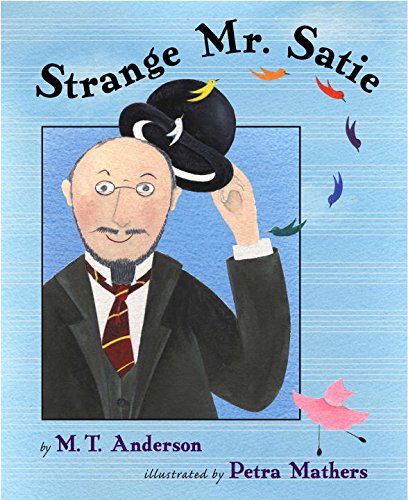 Anderson (), who fashioned a rags-to-riches biography in , is on dangerous ground with the pianist Erik Satie (1866–1925). In this rosy- spectacled account, the experimental composer is a quirky innocent with a short fuse and few friends. " 'I was born/ very young/ in a very old world,'/ said Satie once./ And he never grew up/ but was always a child/ with an old man's smile." Satie temporarily finds "a home" playing piano in Le Chat Noir, a cabaret in Montmartre. His romance with the painter Suzanne Valadon, who flirts over a glass of absinthe, ends in sentimentalized violence ("finally/ he threw her right out the window./ Luckily, she had been/ a circus acrobat/ so she... landed on her/ toes,/ and/ walked/ away"). Anderson, who struggles to find the joy in his misanthropic subject's life, focuses on paradox: "Satie was a genius and a crank, a magician and a child, a fool and a visionary," who composed the whimsical, tricky and collaborated with Picasso and Picabia. Mathers, creator of the Lottie's World series, depicts Satie with a red snare drum, as if to say he marches to his own beat. She gamely pictures Cubist costumes and Surrealist theater, but despite assurances that Satie's art was shocking, her naïve, undersize drawings seem sedate. Anderson and Mathers plump up the whimsy and de-emphasize the insanity of Satie's life, diluting the passion in the process. While Satie's unpredictable music deserves new listeners, young readers may not find this figure compelling. Ages 5-8.