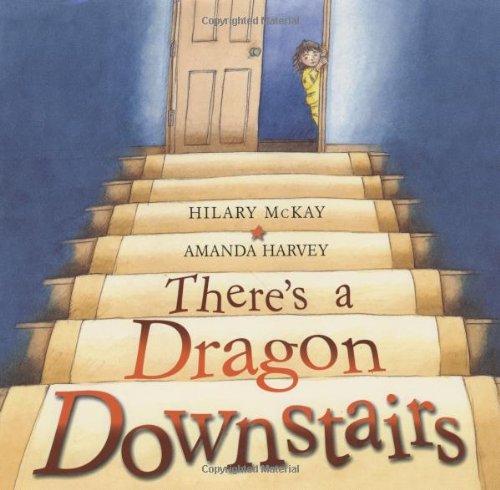 The creators of present an engaging bedtime tale, well suited for youngsters who are prone to hearing things go bump in the night. "There was a dragon downstairs at Sophie's house," the story opens unequivocally. From her bed, the girl hears him "Rattling through the cat flap. Slinking to the living room. Growing and growing in the dark." Kids will chime in as this vivid description of the intruder's actions repeats on subsequent nights, prompting the intrepid child to assume different disguises in which to face the interloper. She sports a homemade cardboard suit of armor to fight the dragon, next wears "her firefighter's helmet and her pump-action supersonic water squirter... because dragons breathe fire," and later dons her princess dress and crown, because "dragons like princesses. ( , thought Sophie, " On each occasion, she finds no dragon downstairs—until one night she decides to confront the culprit as herself and pinpoints the source of the mysterious sounds (her cat). McKay's nimbly paced narrative playfully builds suspense, as does Harvey's watercolor-and-pencil art, which fancifully brims with shadows, many resulting from the light shining on toy dragons and dinosaurs. A charming and comforting read-aloud. Ages 2-5.