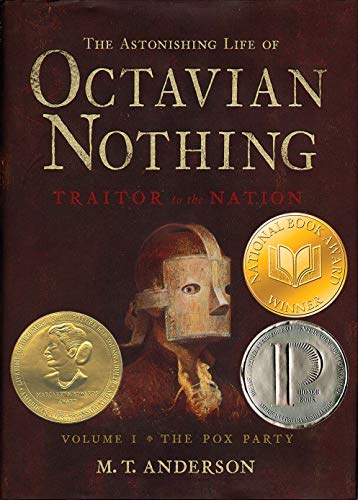 The Astonishing Life of Octavian Nothing, Traitor to the Nation (Volume I: The Pox Party)

Anderson ( ) once again shows the breadth of his talents with this stunningly well-researched novel (the first of two planned) centering on 16-year-old Octavian. The author does not reveal the boy's identity right away, so by the time readers learn that he is the son of an African princess, living a life of relative privilege and intense scrutiny among a group of rational philosophers in pre–Revolutionary War Boston, they can accept his achievements—extraordinary for any teen, but especially for an African-American living at that time. These men teach him the violin, Latin and Greek. Anderson also reveals their strange quirks: the men go by numbers rather than names, and they weigh the food Octavian ingests, as well as his excrement. "It is ever the lot of children to accept their circumstances as universal, and their particularities as general," Octavian states by way of explanation. One day, at age eight, when he ventures into an off-limits room, Octavian learns he is the subject of his teachers' "zoological" study of Africans. Shortly thereafter, the philosophers' key benefactor drops out and new sponsors, led by Mr. Sharpe, follow a different agenda: they want to use Octavian to prove the inferiority of the African race. Mr. Sharpe also instigates the "Pox Party" of the title, during which the guests are inoculated with the smallpox virus, with disastrous results. Here the story, which had been told largely through Octavian's first-person narrative, advances through the letters of a Patriot volunteer, sending news to his sister of battle preparations against the British and about the talented African musician who's joined their company. As in , Anderson pays careful attention to language, but teens may not find this work, written in 18th-century prose, quite as accessible. The construction of Octavian's story is also complex, but the message is straightforward, as Anderson clearly delineates the hypocrisy of the Patriots, who chafe at their own subjugation by British overlords but overlook the enslavement of people like Octavian. Ages 14-up.