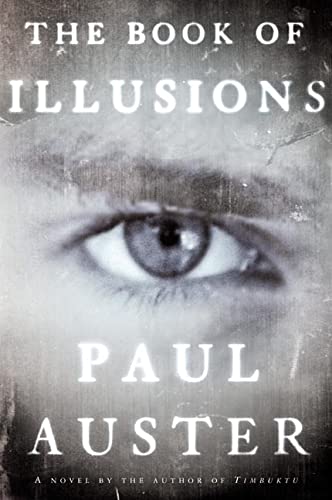 THE BOOK OF ILLUSIONS

David Zimmer, an English professor in Vermont, is trying to rebuild his life—after his family perishes in an airplane crash—by researching the work of Hector Mann, a minor figure from the era of silent movies, in this enigmatic, elliptical 10th novel, one of Auster's best. As in much of the writer's fiction, the narrative revolves around coincidence, fate and odd resonances. Mann's world, like Zimmer's, collapses in a single instant, and Mann, like Zimmer, embarks on self-imposed exile as a way to deal with his grief and do penance. Mann disappeared at the height of his career in 1929, but when Zimmer's book about him is published in the 1980s, it elicits a mysterious invitation: would Zimmer like to meet Mann, who is alive and has been working in secret as actor/director Hector Spelling? The skeptical scholar is lured from Vermont by Alma Grund, who grew up around Mann and is writing his biography. As Grund and Zimmer fall in love, she fills in the decades-long gap in Mann's life—a strange American odyssey that culminated on a ranch in New Mexico where he made movies he refused to screen for anyone. As in previous novels, Auster here makes the unbelievable completely credible, and his overall themes are very much of a piece with those of earlier works: the "mutinous unpredictability of matter" and the way storytellers shape and organize unpredictability. A darker and more somber mood shadows this book; Mann and Zimmer both are tragic figures—even melodramatic—and their stories are compelling. Auster is a novelist of ideas who hasn't forgotten that his first duty is to tell a good story.