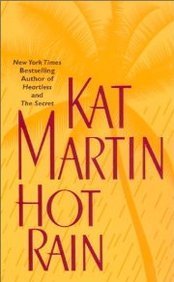 Readers who like their romances—and jungles—steamy will gobble up the latest contemporary romance from the unfailingly entertaining Martin (). With two blonde ex-wives in his past and an arsenal of blonde jokes at his fingertips, undercover ATF agent Jake Dawson thinks his luck couldn't get worse when he discovers a pert blonde stowaway in the middle of his sting operation to capture gun-runners. But his unmasking as a fed by one of the bad guys and a subsequent airplane crash into the Mexican jungle quickly prove him wrong. Luckily Allie Parker, who stumbled into Jake's operation while searching for her roommate's murderer, possesses more brains, guts and stamina than he initially gives her credit for, and it's not long before the attraction between the two of them reaches a boiling point. But Jake regards his heart as a lost cause, and Allie has to fight through all his defenses to prove they can have a future together once his mission is complete. Martin's latest offers few surprises to those familiar with the law-enforcement-hunk-meets-kindhearted-modern-gal formula, or any deep emotional tugs, but the story succeeds admirably as a fluffy escapist adventure that is buoyed by frequent doses of hot sex.