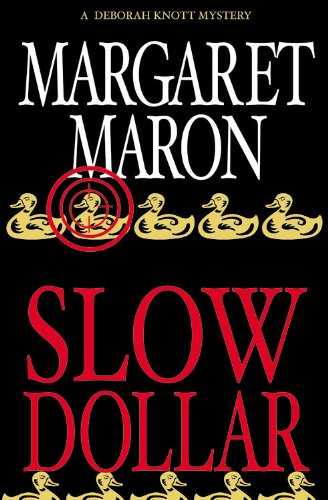 Step right up! Play a game and win your girl a prize! The carnival's in town and Maron brings to this ninth Judge Deborah Knott mystery (after 2001's ) the vigor and verve that have served her so well to date. Larceny, both grand and small, as well as death hover over the Ames Amusement Corporation's show on its arrival in Colleton County, N.C. Deborah, her irrepressible siblings (she's one of 12, the youngest and the only female) and some newfound kinfolk gather to mourn her great-nephew and carnival worker Brazos Hartley, after the young man is stomped to death, his mouth stuffed with quarters. The rural North Carolina dialogue and "carny" talk are perfect, especially descriptions of food, fashion and enchanting scenery of Indian summer in the South. The author draws family relationships so clearly you feel you could melt right into the crowd for barbecue, biscuits, slaw and cobbler. Before Maron is done, there's a bizarre theft of some tacky paintings, a second murder and a steamy romance. Is Judge Knott finally going to settle down and marry? Maron is one of the most seamless Southern authors since Margaret Mitchell, yet she beautifully writes a series about a New York police detective, Lieut. Sigrid Harald, with equal authority. A Knott family tree and a glossary of carny terms round out a novel that Nero Wolfe would describe as "most satisfactory!"