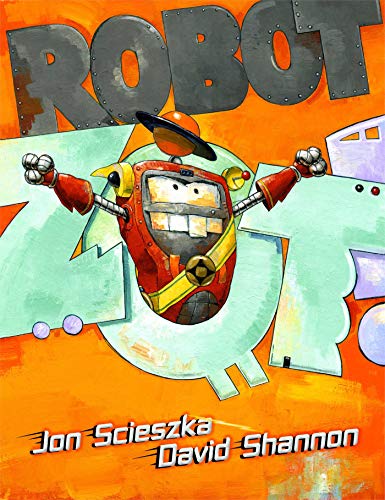 Scieszka and Shannon take a detour from their Trucktown series to pay homage to another object of childhood fascination. Robot Zot, a malevolent red contraption, crash lands “into the heart of the dangerous Earth Army” (a backyard) and makes his way into a fully equipped kitchen. There, it’s revealed that Zot is about the size of an iPod. After fending off “attacks” from a toaster and a television, Zot faces his toughest challenge yet: rescuing the amazing “Queen of all Earth” (an attractive toy cellphone). He and his sidekick (a cross between a snail and a conquistador’s helmet—one of a few references to the Quixotic nature of Zot’s mission) save the queen and escape while a bewildered homeowner surveys the aftermath and blames his dog. Scieszka laces his action-filled narrative with rhymes and repetitive robot phrases (“Robot Zot—never fall./ Robot Zot—conquers all!”). Shannon’s acrylic artwork offers bright colors and plenty of humor (a slightly anthropomorphized blender’s white buttons fall out like teeth under Zot’s attack). This comically self-deluded protagonist proves that fierce warriors of any size can still be brought to their knees by love. Ages 3–7.