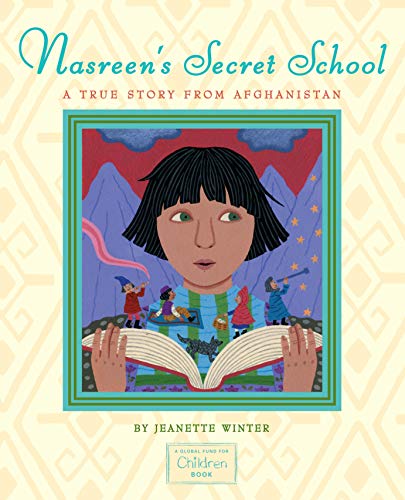 Winter’s ( ) understated but powerful story is set in modern Afghanistan under the Taliban when girls were forbidden to attend school. Offering an adult’s perspective on the changes the country has seen, Nasreen’s grandmother serves as storyteller, her narrative obliquely noting that since the soldiers arrived in Herat, “The art and music and learning are gone. Dark clouds hang over the city.” After soldiers take Nasreen’s father away “with no explanation,” her mother defies the law by leaving home alone to look for him, never returning. Nasreen refuses to smile or talk, and her worried grandmother sneaks her into a “secret school” in a private home, where Nasreen eventually speaks again, makes friends and learns about Afghanistan’s brighter past. Though the child’s parents are still missing, her grandmother takes comfort in her realization that “the soldiers can never close the windows” that the school has opened for Nasreen. Framed by bright, striped borders, Winter’s handsome acrylic folk art effectively imparts the ominous omnipresence of Taliban soldiers, Nasreen’s social and intellectual transformation and the book’s hopeful final note. Ages 6–9.